I’ve been putting off this post for a while because there was just so much to cover. My plan was to wait until I had enough time to write a long post about the whole trip, but because such an opportunity appears to be nowhere in sight, my new plan is to just break it up into multiple posts.

Why did I visit Sweden? 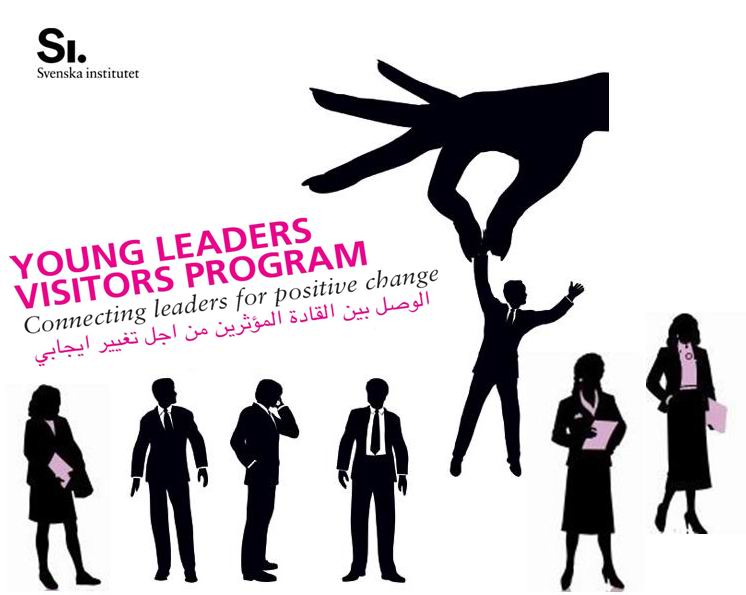 It was just only by chance…. I applied for the Young Leaders Visiting Programme (YLVP) 2009, which was organized by the Swedish institute.
The Swedish Institute Young Leaders Visitors Program (YLVP) is an intercultural leadership program with focus on social media as a tool for positive change. The program invites young opinion-makers from Sweden and selected countries in the MENA region who are actively working for social change in their respective contexts.
We were around 30 participants from Algeria, Egypt, Jordan, Lebanon, Morocco, Syria, Tunisia, West Bank-Gaza and Sweden.
The majority of the participants are actively working for democracy and human rights within the spheres of media, culture, society, business, journalism, blogging, artists, activists, project managers, youth party leaders, politicians, government civil servants, lawyers, teachers and researchers.

I travelled from Egypt with three Egyptian participants and a Palestinian, and arrived at Stockholm’s Arlanda airport.

Our hotel was located very close to the underground train station. While the room was simple it had cable television with english language programs and was very functional.

It was easy to convince myself that I could read Swedish. It looks like German, and German looks like overgrown English, so what’s hard to understand? Unfortunately, many of the letters are not pronounced the way I expected them to, which I found out trying to pronounce Östermalmstorg, which I pronounced it as something else, but after 6 days a Swedish friend told me that we should pronounced it “Östermalmstory”.
I liked also the Swedish greeting, which is Hej, pronounced “Heyy!”.

Once I had checked in I went out to walk around. It was probably about 2 in the afternoon and it was wet and rainy, but the weather got better for the next 4 days; the sun was shining and the temperature was about 25 degrees. Then it became again wet and rainy till the day we left.

After two days mingling with the participants to get to know each other, the facilitators of the programme arrived at the hotel and took us in a bus for a 2 hour journey to Grisslehamn.
Fortunately that day the weather was nice and warm.

In the bus we got to know Javeria Rizvi Kabani the project manager for YLVP.
She is a very nice woman who keeps fighting for rights, and is also a human rights defender.
She always wants to make things better for everyone else. Sweet, caring, and very well-liked by everyone. 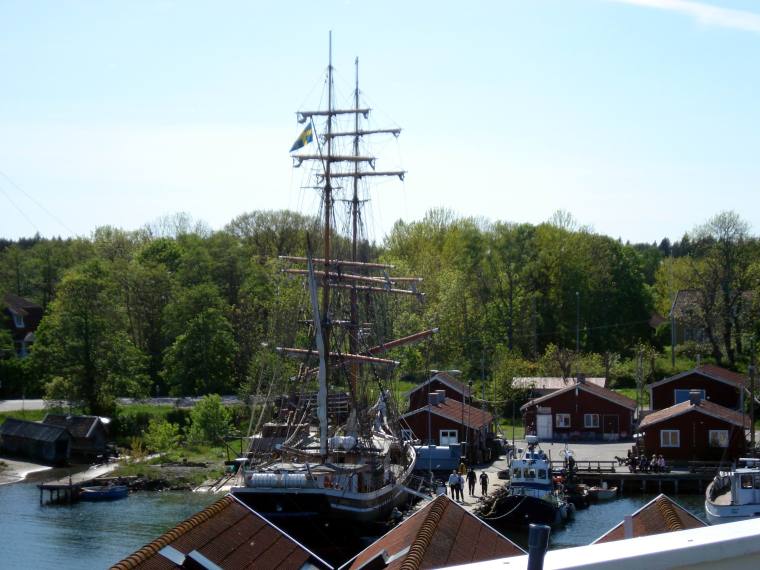 Grisslehamn is a thriving and historic fishing port where picturesque wooden houses blend with lovely gardens.
One thing that Grisslehamn is well known for in Sweden is as the place where Albert Engström lived and worked. He is a well known Swedish artist and writer who is particularly remembered for his pen and ink satirical cartoons. His studio and museum in Grisslehamn is dedicated him, but unfortunately there was no time to visit his museum.

After taking a photo for the group, we began to listen to two members of Hyper Island, Roger Sjögren and Åsa Silfverberg. 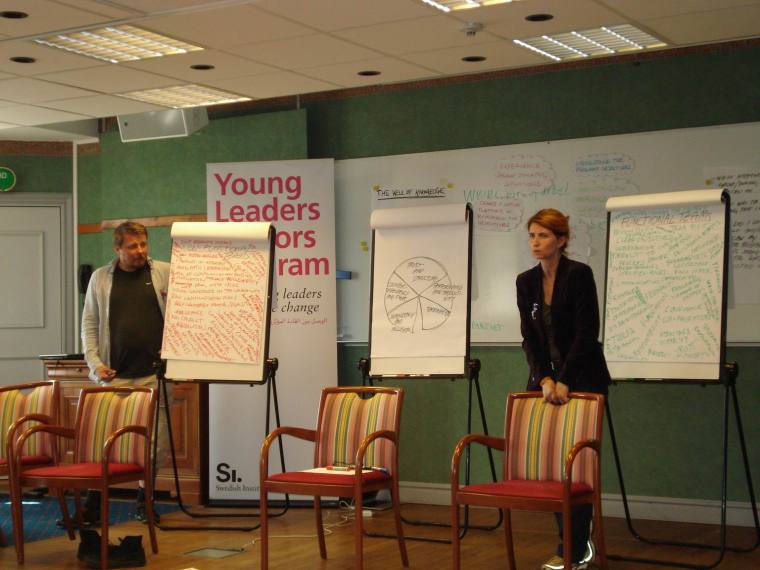 Once you look at Roger’s face you will realize that he is a natural and professional networker and leader, that’s what he does and in such a relaxed style. Charismatic, charming, warm and seems to be always smiling. A good listener, and always interested in others.

Åsa is a great multi-tasker, responsible, reliable, creative, super-organized, and always willing to help to improve our work or offer positive suggestions.

Roger and Åsa started the lecture by trying to make us understand the concept of being a leader or a member in the team.

I understood from different kinds of lectures that working in teams can be rewarding, but at times it can be difficult and downright frustrating, if there are poor communicators in the team.
Some of us might have felt left in the dark, confused or misunderstood, but Roger and Åsa were always there to help to create a successful team by using effective communication methods which are necessary for both team members and leaders.

Their advice to us was if you have a problem with someone in your group, talk to him about it. Letting bad feelings brew will only make you sour and want to isolate yourself from the group. Not only does it feel good to get it out, but it will be better for the team in the long run.

This happen to us in several sessions, which called (Reflection Sessions).
Reflection sessions are designed to provide the group with the opportunity to discuss their community engagements and to focus on the larger social issues which are involved. The sessions had been going extremely well.
After every reflection session most of us began to understand that to be a good leader or a good member in your team you should have certain characteristics:

– Be a good listener by listening actively, looking at the person who’s speaking to you, and asking for more information to clear up any confusion before moving on.
– Don’t blame others or you will lose their respect. Pointing the finger will only make you look cowardly.
– Support group members’ ideas, and combine them with your ideas.
– Get involved by sharing suggestions, ideas, solutions and proposals with your team members. Take the time to help your fellow teammates, no matter the request.

These were not everything; we had learned a lot and a lot of tips.

After two days we began to listen to a man who I used to see him sitting in a chair hugging or working on his laptop all the time in silence , doesn’t speak a lot, just smiling on our comments.
So, everyone was curious to know about him, but once he opened his mouth, he spoke the truth (F words) what make some of us got shocked, others began to laugh, some got offended, and I began to like his honesly and smile on what he said.

His lecture began with very famous story, The Princess and the Frog, but in his story the princess kissed the frog and he didn’t turn into a handsome prince, so she kissed him again, and again, but, guess what? He wasn’t a prince.

So, what did you understand from this story?
In fairy tales a princess kisses a frog, and it becomes a prince. But in reality, kissing a slimy, warty, green frog won’t deliver a prince.

In the end of the course all of us became fans of that man, Mark Comerford, who became our legendary mentor!!

Mark Comerford established Europe’s first online newspaper in 1994 when he launched the website of Sweden’s biggest daily newspaper Aftonbladet.
He initially moved to Sweden in the early 1980s to work as a welder and a shipbuilder before moving to work in the digital world.

Since then he has spread his journalistic knowledge across the globe teaching people from Africa to Britain how to get the best out of the Internet and digital technologies. He is a keen advocate of the notion that journalists should not be confined by what technology can currently offer, but rather make technology work for them.

For me teaching is an art form, and Mark was good in that field, plus he has his unique way of teaching concepts of social media.
For those who have been living in the social media space for the past several years, it’s easy to understand the value of social media, but it’s hard to grasp the concept. So, when he teaches Social Media to others, he keeps the exercise as simple as possible.
After five days we packed our luggage to leave Grisslehamn to begin a new journey of learning in Stockholm in Hyper Island.

watch out for the next bost….

6 thoughts on “Working on my lucky birthday!!”